Appeal Microresidence Network at the International Conference on Opportunities in the Arts, TCE 2018 at Quebec City, Canada

*1
TransCultural Exchange (TCE) is a non-profit organization whose stated mission is “to foster a greater understanding of world cultures through large-scale global projects, artist exchanges and, most notably, a biennale International Conference on Opportunities in the Arts.”  TransCultural Exchange was founded by Mary Sherman in 1989. http://www.transculturalexchange.org/ 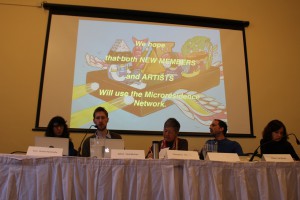 I was given the opportunity to participate in Transcultural Exchange 2018 in Quebec City, Canada as representative of Youkobo Art Space and the Microresidence Network. This was my first experience to join an art conference of this kind that brings together various professionals from the arts field to learn, exchange and network over a three-day period. My overall impression was positive, and I’m thankful for the opportunity to learn about a broad and far-reaching range of subjects through the various panel discussions and presentations, in addition to connecting with many other art practitioners who are active in diverse fields and geographical regions.

Of particular note was the large number of academicians at the conference, in addition to the lack of a younger audience in a conference that also aims to attract and support emerging artists. Many of the people I met had already attended previous Transcultural Exchanges, or seemed to some extent to be “financially secure” artists. Nevertheless, the portfolio reviews did give an invaluable opportunity to the attendee artists and more importantly to the volunteers of the conference, many of whom were art students studying locally or in other Canadian cities, to gain invaluable feedback about their work and how they might navigate a future path as artists.

Another point worthy of mention is that, while it is clearly a difficult problem to address, the majority of participants were from North America and Europe, and even when other geographical regions were represented in discussions, the speaker also tended to be from North America or Europe. This is of course an inevitable result of holding the event in English and in North America, as budgets are undoubtedly limited for this kind of event. Nevertheless, I think this is an important issue that needs to be addressed in future conferences, by subsidizing participation according to geographical location, for example.

The presentation I gave about the Microresidence Network took place on the first day of the conference, within a panel discussion titled Mapping Mobility: Resources for Artists Looking to Find Opportunities in Europe and Beyond that was attended by around 30 to 40 people. This session brought together five panelists including myself, each giving a short presentation about their activities that cover a broad spectrum of geographical regions and specific resources for artists that extend outside of North America (a similar panel discussion for opportunities in North America had been held earlier in the day).

Judging from the feedback received from the other panelists and the audience, there was a genuine interest in the Microresidence Network, both from artists who expressed interest in participating in some of the residence programs I introduced, but also from other art organizers who expressed interest in learning more about or even joining the network. My general impression was that the Microresidence Network and the members it represents did offer a real, more accessible alternative to some of the larger, more established AIR that participated in the conference.

In being frequently asked what a “microresidence” was, I felt even more keenly how important it is to have a strong identity as a network, whose values are also clearly stated. What alternative does the “microresidence” model offer? What is it trying to differentiate from? While also serving as a platform giving greater visibility to the Microresidence Network, the conference also gave an invaluable opportunity to reflect on important questions such as these.

In addition to giving the above presentation, I also attended a series of portfolio reviews over the first two days of the conference. These took the form of 20-minute, one-to-one sessions paid by attendee artists who wished to gain feedback about their work and guidance about how to apply for residencies and other opportunities from the art professionals speaking at the conference. The individuals who had reserved time with us were all artists or art students who either had clear goals to undertake an artist residency in Japan, or simply wished to have objective feedback about their practice. Judging from the reactions after the reviews and subsequent emails from several individuals thanking me after the conference, my comments and advice had proven useful. 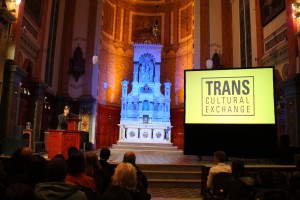 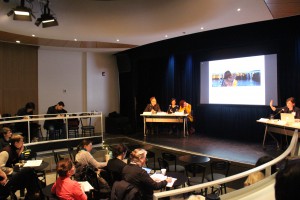