Welcome to the Microresidence Network, a meeting point for microresidencies around the world!

What is a microresidency*? One might compare them to bento (Japanese for “lunchbox”): They are diverse, bringing together weird and wonderful “foods” and “ingredients”; they can lead to new and unexpected experiences; they are associated with the “hand-made”, with passion and care; and they are borderless, connecting people (creator, host, audience) of different backgrounds and nationalities.

This site, a database of microresidencies around the globe, aims to bring together artists both artists and AIR (microresidence) hosts.

For artists, we hope you will find a unique AIR alternative here: The microresidency, with all its “macro” potential to support your self-directed activities. For AIR hosts, we hope this site will help artists find you, while also offering opportunities to connect with likeminded microresidencies.

By building a network founded on trust and face-to-face connections, and with a strong belief in the vital role AIR play as social vessels supporting the mobility of artists, we hope to introduce creators to hosts and bring greater visibility to the “tantalizing”, diverse activities of both.

Introduction to the Microresidence Network

AIR exist in different forms throughout the world. Since becoming a member of the worldwide network of AIR “Res Artis” in 2000, Youkobo has learned of other AIR outside the network through exchange with other members, leading it to conduct a survey in 2010 (*1).

Coining the term “microresidence” to refer to AIR that are flexible and “micro” in scale while possessing macro-level potential, Youkobo held a small gathering of likeminded AIR during the Res Artis General Meeting in Tokyo in 2012. Together, they launched the Microresidence Network as a global database of microresidencies, aiming to give greater visibility to such organizations that can be likened to “temporary overseas hideaways” for artists who have diverse goals and are at different stages in their careers.

AIR that identify themselves as microresidencies join the Microresidence Network voluntarily, and its members are increasing organically through introductions by inaugural members, new AIR initiatives and artists. There is no central committee leading the Microresidence Network. Rather, its activities develop through voluntary connections and exchange between members, which include direct communication and face-to-face gatherings. With an awareness of the people-to-people bonds and rich individuality that are characteristic of microresidencies scattered throughout the world, the network is founded on informal relations between members who have a mutual knowledge of and respect for each other’s activities.

Since 2012, a te-bento style (*2) microresidence forum has been held almost annually in Japan, and in Armenia and Finland in 2016. Those interested in microresidencies are encouraged to visit likeminded institutions in one’s own region of activity. By talking face-to-face and learning from one another, new impetus leading to further circles of activity is sure to be gained.

A Japanese expression that refers to a lunchbox made by hand, but also means to pay for one’s own participation in an event or programme. It embodies the idea that progress can be achieved more quickly if each person in a group cooperates to “prepare” and “bring to the table” what each can within their means.

In relation to artists, it refers to independently minded individuals who are able to find their own means of financing their participation in AIR.

2005 *“Microresidence” coined by Lois Recoder and Sandra Gibson in relation to their residency experience at Youkobo. 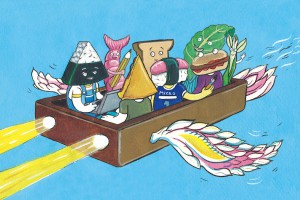 Note about the cover illustration: